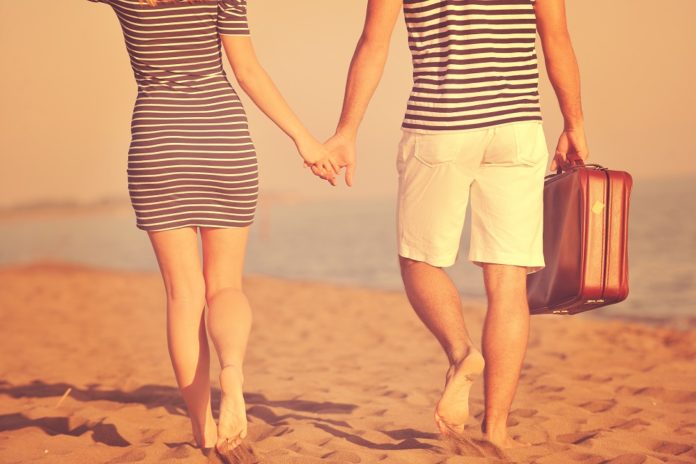 e are in a house. A ramshackle Victorian pile, not far from the ocean. Flocked wallpaper in faded silver and gold. Ceilings cracked and peeling where the rain has found its way in. The house is all doors and secret corners. One room is strewn with empty violin cases and countless unframed oil paintings depicting tumultuous seascapes. Another, inexplicably, teems with butterflies. In the kitchen, among jars of pickles and stacks of canned goods, jugs of cheap juice and boxes of dried pasta, a store-bought birthday cake sits on the Formica table, its pink candles melting onto the soft white icing.

A woman dresses herself, as if preparing to go out. As if preparing to leave. She puts on a pair of smart slacks. A cape. A dash of lipstick. She makes her way tentatively down the stairs, steadying herself against the wall. Day after day she enacts this exact same ritual. She never makes it past the front door. Maybe tomorrow…

Greta Gerwig’s first fashion shoot plays out very much like a film set, with her as director, the artist Tina Barney as director of photography, W’s Sara Moonves as costume designer, and the British singer Florence Welch in the role of the heroine. “It’s like Safe meets Grey Gardens meets Rosemary’s Baby” is how Gerwig, 34, describes the narrative, which is at once creepy, poignant, and defiantly demented. “The theme was dark fantasy, and, in a certain way, Florence already lives there, so I didn’t want to double down on what she’s already made,” Gerwig says. “It would actually be her dark fantasy—trapped in a house as a housewife forever.”

Greta Gerwig: Can we give her a purse? “I’m finally ready to leave the house”—Florence, that’s your emotion.
Florence Welch: Am I happy about leaving? Or scared?
Gerwig: I think you’re thrilled. You are excited but also nervous. You haven’t left the house in 12 years!
Welch: Do people take butterflies as currency? That’s all I have. Butterflies and tears!

Gerwig has been caught up in her own interminable loop of sorts for months, doing press for Lady Bird, a film she both wrote and directed. The quietly heroic and deeply resonant coming-of-age story, in which Saoirse Ronan plays a teenage girl with an outsize sense of her own destiny (the assumption is that the film is autobiographical, though Gerwig insists it is not), earned Gerwig a Golden Globe for best motion picture, musical or comedy, and five Oscar nominations, including best picture; Ronan picked up a Globe for best actress.

For Gerwig, who cowrote the films Frances Ha and Mistress America with her partner, Noah Baumbach, but who up until this year was primarily known as an actress, promoting Lady Bird has meant a lot of talking—Q&A’s, interviews, magazine stories like this one. The talking, Gerwig says, has not been entirely unpleasant. Different, she observes, from talking about a particular film part, which for her has always entailed some out-of-body, borderline-existential, awkward negotiation. “It was like I was always performing the part of Greta talking about the role,” she says. “Some hall of mirrors I couldn’t get behind. But I was Greta when I directed the movie, and I am Greta when I am talking to you about making the movie, and there’s no weird negotiation for me about where I stand in relation to the work.” It is plain to see she is happy to be back behind the camera, working on this project. “This is the first time I’ve made something in months and months,” she says. “It’s so much fun.”

Welch: It’s not really a stretch for me to play a mad person—someone who’s seeing and hearing things and trying to put butterflies in her handbag.
Gerwig: My favorite moment was when we realized maybe the pig doesn’t exist. The thought that for this woman the pig, like the butterflies, is something that exists only in her mind.

I will take the opportunity to interject here that the poop left on Welch’s Valentino tulle dress by Marshmallow, who plays the role of the imaginary pig in the story, was most definitely real.

Gerwig and Welch first met about five years ago. Welch’s album Ceremonials was starting to take off in the States, and Gerwig was receiving acclaim for her performance in Frances Ha. Both women were quickly swept up by the fashion world. It was at a fashion event that Welch recognized a kindred spirit—or, at the very least, another tall, beautiful woman in a borrowed dress with a look of thinly veiled terror in her eyes. “I got invited to a lot of things. It was like, My god, what am I doing here?” Welch recalls. “Greta walked in, and I was like, Aah. I ran up and said, ‘I’m obsessed with you!’ And she was so sweet. She said, ‘I’m obsessed with you, too! I run around New York listening to your music.’ ”

Welch, who is wild and fearless onstage (she made a flying leap off the stage while performing at Coachella in 2015 and ended up breaking her foot), claims to be incredibly shy in real life. She took Gerwig’s contact information that night, but never did anything with it. “I was like, What are we going to do? Hang out?” But last September, when Welch was working on the follow-up to her 2015 album, How Big, How Blue, How Beautiful,and dreaming about the people she’d most love to collaborate with, she reached out to Gerwig. “That songs can be triumphant and exciting but at the same time you just don’t have it figured out, that things can be joyful and you can be strong but there is an underlying sense that all the time you are questioning—I thought Greta would get it.”

The two reunited in New York, over waffles and pierogi at Veselka, a Ukrainian joint in the East Village, and talked about working on a project together. “One of my very favorite parts of making Lady Bird was working with Jon Brion on the music,” Gerwig says. “Getting to be in another person’s world is really exciting. When you love someone else’s art, and it’s not an art you can make, it’s like a contact high being around them. You have superpowers I can’t possibly understand, but I can also love your superpowers.”

Welch: I’ve never had anyone describe my music in the most perfect way. Greta said, “I like it because it’s like the deepest, darkest well of pain, and then you just throw a big party in there and invite everybody.”
Gerwig: That’s right, that’s what her music sounds like to me. Your music makes me cry uncontrollably, which is a good thing.

Like Welch, when Gerwig is performing, she seems completely uninhibited, and as a result she is often mistaken for the confident, slightly screwball characters she has played in her films. Yet, up until the W assignment, Gerwig’s experience of fashion shoots, of being in front of that camera, was a feeling of unbridled self-consciousness about the fact that she wasn’t a model, and a fear of ripping the clothes.

“It’s funny where people find their freedom,” Gerwig observes, recounting something Rebecca Miller, who directed her in Maggie’s Plan, once told her. “Rebecca is a good actor, but it never fit with her. She said to me, ‘One of the great pleasures of directing is that you get to be invisible, and it feels great.’ I have felt invisibility as an actor, which is very seductive at times, but I’ve never felt invisible once the film is out and I have to smile and do the things. When I was on set making Lady Bird, I knew what Rebecca meant.”

Welch: I had a boyfriend say, “I keep dreaming that you’re building a house full of rooms that I cannot go into.” And when you make a record, that is literally what you start doing. You start taking your desires and your secret treasure, and you start making this house.
Gerwig: When we first met and talked, I remember you saying that and thinking it was so weird because I had a partner, and ex-partner, say to me, “You’re building a house inside of our house—you’re building a minihouse where you go and live, and I’m not invited.” And I was like, “Yeah, I’m also building a secret escape tunnel. You have no idea what’s happening underneath.”

New York Personal Injury Lawyer Could Resolve The Case the Client's In The Client's A...